Fullerton City Council voted 3-2 to repeal its recently-passed cannabis ordinance after much public comment and discussion at the Feb 16 meeting. The ordinance, which allowed a limited number of commercial cannabis businesses, was passed in November 2020 by the previous City Council. The newly-configured City Council, including newly-elected Nick Dunlap and Fred Jung, along with Mayor Whitaker, voted to repeal the ordinance.

“Whether you agree with legalization or not, this ordinance, as far as I’m concerned, is flawed,” Councilmember Fred Jung said, who made the motion to repeal the ordinance. Two flaws he cited were the lack of a residential “buffer” (although Council has the authority to add buffers) and that the number of allowed dispensaries (five) is “arbitrary” (an aspect that is also determined by Council).

There was a separate agenda item to discuss amendments to the original ordinance including residential buffers; however, because the ordinance was rescinded this item was “moot,” in the words of the City Attorney.

Mayor Pro Tem Nick Dunlap seconded the motion to repeal the ordinance. “This has been going on since about 2016…how do you think our roads would look if we would have invested the same amount of time and resources over the past four and a half years that has been invested into this initiative?”

According to an October 2020 City staff report, based on revenue projections from other cities which have allowed similar cannabis businesses, the projected annual revenue to the City under the now-rescinded ordinance could have been $2.25 to $3.75 million once fully implemented.

Councilmember Jesus Silva, who voted for the original ordinance and voted against repealing it, argued in its favor. He said that cities such as Santa Ana and Bellflower, which have cannabis ordinances, have been successful in shutting down illegal dispensaries, which continue to operate in Fullerton.

Councilmember Ahmad Zahra said that cannabis is already in Fullerton in the form of illegal dispensaries, and that the purpose of the ordinance is regulation and public safety.

“This is not about bringing cannabis into the city,” Zahra said. “This is about trying to regulate it, just like any other substance or product that is being sold, like alcohol, tobacco, and so on—where you create regulations to provide public safety for the consumers.” He added that revenue from the ordinance would allow the City to invest in anti-drug programming and after school programs.

Fullerton’s Community and Economic Development Director Matt Foulkes told The Observer, “Not allowing legal cannabis businesses in town limits our ability to request assistance with enforcement from the State Bureau of Cannabis Control on illegal dispensaries and prohibits Fullerton from being eligible for state grants that would have funded educational/anti-drug efforts and driving under the influence of cannabis programs. In order to be eligible for State cannabis grants, a City must allow commercial cannabis (retail or cultivation).”

Mayor Whitaker, who voted to repeal the ordinance, acknowledged that “the black market will continue to persist when it comes to this,” but felt that the community members who had opposed the ordinance were not adequately listened to.

“This item has been an obstacle to so many of the priorities that we need to deal with in this City right now. And for that reason, I think it is a good time to remove that obstacle and for us to be able to focus on the streets, the infrastructure, some of the other issues that we have in the City,” Whitaker said. 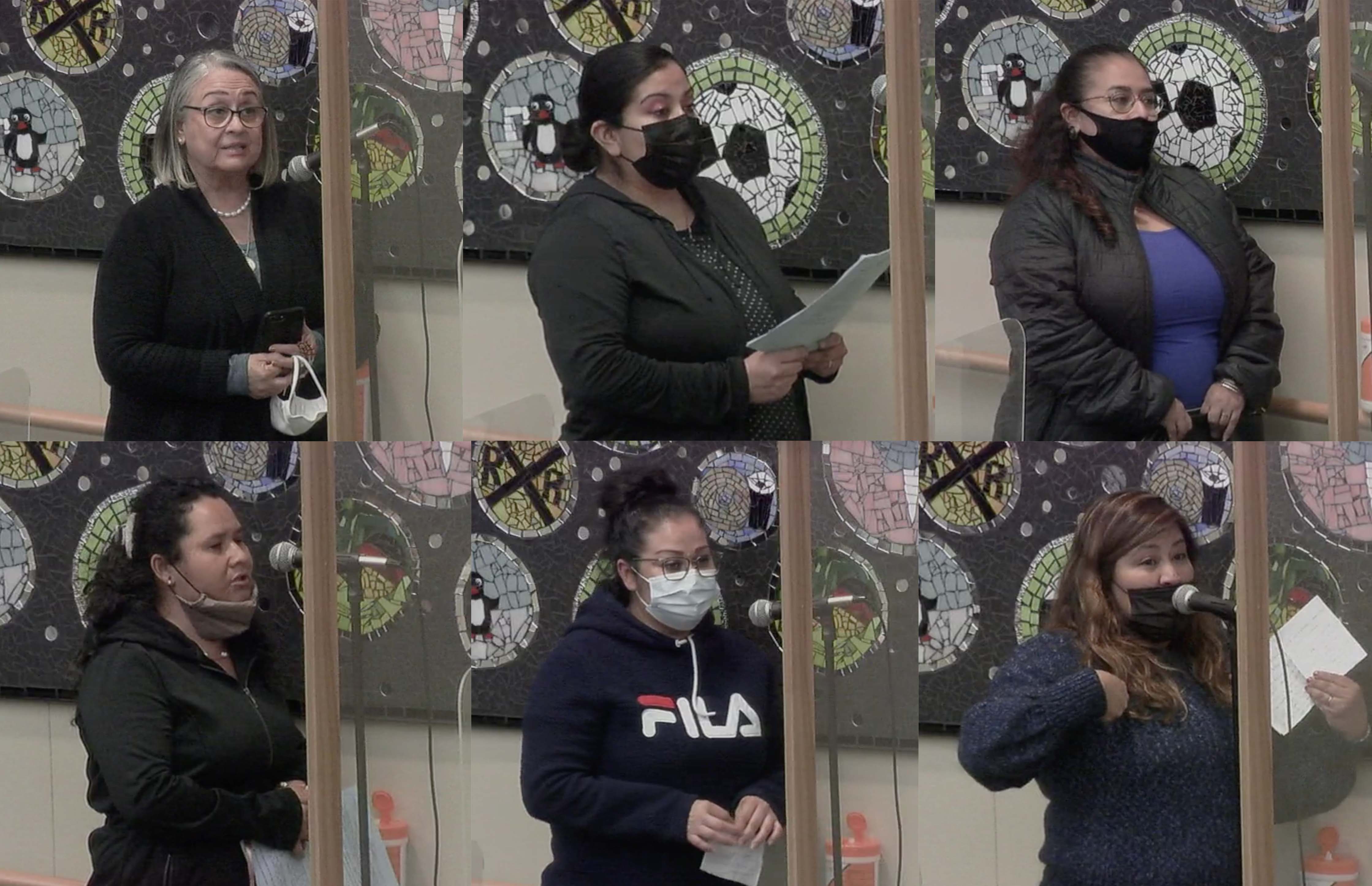 Many residents of south Fullerton have repeatedly spoken against the City’s cannabis ordinance, citing concern for the impact on children and disproportionate concentration of dispensaries in the south.

Many members of the public showed up in person and via Zoom to give their positions on the ordinance. The majority of speakers were in favor of repealing the ordinance.

A large contingent of Latina women from south Fullerton, who have consistently spoken in opposition to the ordinance throughout the process, continued to argue against legalizing cannabis dispensaries—citing concerns for their children and quality of life.

“We believe in good values. We believe in no drugs, using positive things to deal with any stressors that we may have,” Lucia Maturino said.

Monica Cruz said “I don’t want these dispensaries to be close to our schools and our neighborhoods in such an easy and accessible way, just as alcohol is. I believe that my children, just like any young person, can be easily influenced to consume marijuana because they’re going to see it as something normal.”

The proposed ordinance had a required 800-foot buffer from schools and youth centers.

Some residents said they felt the community outreach did not adequately take into account their wishes.

Some spoke in favor of keeping the ordinance.

Timothy Dodd, CEO of a cannabis dispensary chain in Los Angeles, said “We have never provided any cannabis to any underage person. But yet tonight I’ve been hearing a lot about how the cannabis industry does this. I think the point of confusion here is that illegal dispensaries appear to be operating with some degree of impunity in Fullerton. They will sell untested product. They’re untaxed, and they’re not licensed by the State. The dispensaries that we operate do not sell cannabis to children.”

Kandice Hawes, Executive Director of Orange County NORML (National Organization for the Reform of Marijuana Laws), said, “The ordinance comes from a lot of work, from a lot of advocates, hundreds of hours of staff time, several community outreach events trying to educate the public. So, it would be a shame to see this all go to waste. Fullerton approved Prop 64 and your own poll showed that citizens strongly supported cannabis dispensaries in your City.”

Ultimately, Council voted 3-2 (Whitaker, Jung, and Dunlap “yes.” Silva and Zahra “no”) to repeal the ordinance.

A Ballot Measure in the Works

On January 15, the city of Fullerton was served with a “notice of intention” to circulate a petition to place a cannabis ordinance on the ballot for Fullerton voters to decide.

The notice was signed by Fullerton resident Vivian Jaramillo who said she was approached by Adam Spiker (a consultant working on behalf of cannabis industry advocates) with a proposed ordinance that is similar to the one rescinded by the City.

“I was already worried that this new Council was going to rescind it or adjust it so much that it was all going to be on the south side,” Jaramillo told The Observer. “I’m not having much confidence here in our Council anymore, so when Adam told me all about it, I said, ‘Heck yea, I’ll sign it.’”

Jaramillo, who has spoken at previous council meetings in favor of the cannabis ordinance, said that she and others she knows buy cannabis for medicinal purposes.

“Usually I go to Santa Ana, but when I can’t I’ve gone to the illegal ones here in Fullerton. It just irks me that Fullerton gets no money for that.”

Adam Spiker told The Observer that the proposed ballot measure and accompanying ordinance could be on the 2022 ballot.

He said that one problem with the recently-rescinded ordinance was inadequate enforcement mechanisms for illegal dispensaries. The best way to get rid of illegal dispensaries, he said, is through financial penalties. “In our initiative we’re proposing that there be a $10,000 per day fine attached to the landlord and/or operator of an illicit business,” he said.

According to Fullerton’s Community and Economic Development Director Matt Foulkes, because Fullerton is a “General Law” city and not a “Charter City” like Santa Ana, the City is legally unable to levy those steep fines.

“This distinction between General Law and Charter Cities (like Santa Ana) is important because the $10,000 dollar citations you hear about in other cities and from cannabis consultants are only applicable to Charter Cities,” Foulkes said.

Pursuant to state law, the maximum citation amounts Fullerton can charge are:

If the illegal business has also made building alterations without permits, which most have, the City also issues Building and Safety fines on top of the Administrative Citations above.

Lawyer Damian Martin is listed as legal counsel for the group behind the potential ballot measure.

When asked which groups or entities are behind the proposed ballot measure, Martin wrote, “The group backing the Fullerton Cannabis Regulation and Taxation Measure cannot be identified at this time as it has not yet been defined.”

At the Feb. 16 meeting, Councilmember Fred Jung told the opponents of the cannabis ordinance, “The industry itself has deep pockets and I’m sure that they will fund this and you will have to decide…All the advocates out there, your work doesn’t end this evening. I hope you realize that. This is a small victory in a long battle for all of you.”

Councilmember Zarha said, “Once a ballot measure is voted in, Council has no power to change it. I’d rather us be in control of it than have some other group do that.”

• Cannabis and Public Safety: a Q & A Session

Protect local journalism – please subscribe to the print edition of the Fullerton Observer. Our online edition is free, but we depend on print subscriptions from readers. Annual subscription is only $35/year. It only takes a minute – Click Here To Subscribe. Thank you for your support for the Fullerton Observer. Click here to view a copy of the print edition.