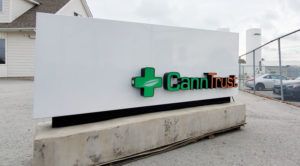 CannTrust is one of the cannabis producers that navigated serious regulatory trouble without facing any monetary penalties. (Photo by Matt Lamers)

Canada’s top cannabis regulator chose not to fine CannTrust and Bonify Medical Cannabis despite significant violations of the rules governing the country’s marijuana industry – including illegal cultivation and sale.

In fact, Health Canada has not issued fines – known as administrative monetary penalties – to any cannabis business since recreational legalization in late 2018, the regulator told Marijuana Business Daily.

That has raised the question of what, if any, legal violations would trigger the agency to impose a fine.

Potential penalties for violating the Cannabis Act and its regulations include an administrative monetary penalty of up to 1 million Canadian dollars ($780,000).

Instead, the Canadian government has used a combination of letters, phone calls and license suspensions, according to Health Canada’s latest compliance report covering the 2018-19 fiscal year.

The compliance report – the first to cover the early months of legalization in Canada – does not show any fines having been issued.

“To date, Health Canada has not issued an (administrative monetary penalty),” spokeswoman Tammy Jarbeau confirmed in an email to MJBizDaily.

“In the vast majority of cases, regulated parties undertake voluntarily action to correct non-compliance once they are made aware of the regulatory requirement(s),” she continued.

“In other cases, other enforcement tools, such as a warning letters, license suspension or revocation, are determined to be most effective for the circumstance.”

Industry experts are not sure what activities would warrant a fine from since none have been issued by Health Canada.

“Generally speaking, even if the primary intention is to encourage compliance, and not to penalize, at some point there has to be some real consequences imposed to keep everybody in line, in terms of all aspects of enforcement, whether it’s license suspensions or monetary penalties,” said Trina Fraser, a partner at Brazeau Seller Law in Ottawa, Ontario, who leads the firm’s cannabis practice.

“I feel like sooner or later someone will be made an example out of, because there is blatant, flagrant noncompliance out there. We know that. Eventually it becomes de facto permitted.”

Cannabis businesses caught violating the regulations have still faced penalties, even though they have fallen short of administrative monetary penalties.

For instance, CannTrust’s licenses were suspended after a whistleblower alerted authorities to illegal cultivation taking place at a facility.

Bonify’s authority to sell cannabis was suspended by Health Canada on Feb. 4, 2019, after the regulator concluded the producer had possessed, distributed and sold illegally purchased marijuana in 2018.

License suspensions can leave businesses with no revenue opportunities.

In lieu of fines, Health Canada has used other levers to encourage compliance with the federal rules governing marijuana businesses.

Roughly 293 inspections were conducted, according to the agency’s latest report.

The lone suspension was Bonify. (CannTrust’s licenses were suspended later in 2019.)

Asked why Bonify and CannTrust faced no fines for the regulatory violations, Health Canada said it “took significant compliance and enforcement actions to protect public health and safety, including unannounced inspections, seizure and detention of product and ultimately suspension of their licenses to sell cannabis, which is a significant consequence of serious noncompliance.”

“Bonify and CannTrust undertook voluntary actions to address identified areas of noncompliances, including voluntary stop sales and/or product recalls and following the suspension of their licenses, implemented a series of additional measures to address the issues that led to the suspensions,” the regulator told MJBizDaily.

Health Canada said it reviewed all information submitted by the two companies and “was satisfied that they addressed all issues that led to the suspension of their licenses and reinstated their licenses.”

CEO Pierre Morris said Bonify is looking toward the future.

“None of this is inconsistent with what we expected,” he said. “The company has moved beyond the events that happened under former management.

“It looks forward to bringing quality product back into the Canadian market.”

Sherry Boodram, CEO and co-founder of Toronto-based regulatory consulting firm CannDelta, said Health Canada needs a more transparent process, “not just for the public but also for license holders so that they are aware of possible enforcement actions. It’s important for people to know what the scenario is that they (license holders) would be issued a fine.”

Boodram wants to know specifically what constitutes a serious offence for noncompliance that warrants a financial penalty.

Further, monetary penalties are supposed to be issued within six months of Health Canada becoming aware of the noncompliance.

“If a smaller company did something like (CannTrust or Bonify), would they be treated the same? It kind of makes you wonder if the situation would be the same had it been a micro license holder.”

“A decision on whether to proceed with a criminal investigation or charges is the role of law enforcement, not Health Canada,” she said.

In early 2019, the Winnipeg Free Press reported that Bonify was not being investigated by the RCMP.

However, no police force seems to have launched an investigation.

A police spokesperson first told MJBizDaily that the Royal Canadian Mounted Police, “in consultation with Health Canada,” confirmed that the health department “would not be referring the matter pertaining to Bonify Medical Cannabis to the RCMP to conduct a criminal investigation.”

The RCMP later revised its statement: “Health Canada referred the case to the RCMP and, after review, it was determined we would not be conducting an investigation. If there was an investigation to be done, it would be by the police force of jurisdiction.”

The police force of jurisdiction is the Winnipeg Police Service (WPS).

“The WPS did not investigate this situation, and further, it does not appear that we were asked to,” a WPS spokesperson noted in an email to MJBizDaily.

Matt Lamers is Marijuana Business Daily’s international editor, based near Toronto. He can be reached at [email protected].