Trulieve (OTCPK:TCNNF) won a trial court victory over the state of Florida after challenging the state’s cap on dispensaries as unconstitutional. Florida and Trulieve have settled the case before the state’s appeal of the trial verdict.

This is a big victory for Trulieve, especially if they can open those stores quickly and gain a further advantage over their peers in patient count and revenue/store. But this is also likely to spell headaches for the State of Florida: This settlement looks patently unfair to other cannabis companies and could lead to a lawsuit from other Florida providers on pace to bump against Florida’s dispensary cap, especially Curaleaf (OTCPK:CURLF) and Surterra Wellness (private).

Those potential headaches for Florida may keep lawyers busy, but they won’t dampen Trulieve’s buzz – this is a big win for Trulieve.

Trulieve is expected to announce earnings for their December quarter in the next couple weeks. My full coverage of Trulieve, as always, can be found on The Growth Operation.

“Allows medical use of marijuana for individuals with debilitating medical conditions as determined by a licensed Florida physician. Allows caregivers to assist patients’ medical use of marijuana. The Department of Health shall register and regulate centers that produce and distribute marijuana for medical purposes and shall issue identification cards to patients and caregivers. Applies only to Florida law. Does not immunize violations of federal law or any non-medical use, possession or production of marijuana.

Among other provisions, the bill banned smoking of medical marijuana and placed a cap on the number of retail dispensaries until April 1st, 2020.

Neither of these restrictions were included on Florida’s ballot text, quoted above.

Florida was sued on both restrictions in different cases.

Florida lost. After losing at trial, Florida appealed and the ban on smoking medical marijuana remained in place pending a stay. In January 2019, new Florida Governor Ron DeSantis announced he was dropping the appeal. Smoking medical cannabis now legal in Florida, and smokable cannabis is offered by Trulieve, Curaleaf, Liberty Health, and others.

At the time the cap was enacted, Trulieve already had 14 dispensaries and had already applied for licenses for 27 total dispensaries – two more than the cap allowed when implemented. Other companies in Florida had only opened a combined 17 dispensaries at the time, suggesting Trulieve was hurt the most by this cap.

Trulieve argued this was unfair because the company picked its first 14 locations without knowing such a cap – and such a low cap – would be impose. If Trulieve had known they would be limited to 25 (later 30 and 35) dispensary locations, they would have chosen their initial locations much more carefully. The State of Florida denied this complaint and the case went to trial.

“‘The evidence clearly and conclusively establishes beyond any doubt that conveniently located medical marijuana dispensaries (as opposed to vehicle delivery, the only allowed alternative means of dispensing) promote authorized users’ improved access to medical marijuana products and related information and services, at lower cost, and promote public safety (the stated goals for regulation in the amendment),’ Gievers wrote in Friday’s ruling.

The statutory cap ‘erects barriers that needlessly increase patients’ costs, risks, and inconvenience, delay access to products, and reduce patients’ practical choice, information, privacy and safety,’ the judge wrote, adding that the limit on the number of dispensaries, ‘even if time limited, is the kind of regulation that the amendment was intended to eliminate.'”

Settlement in Lieu of Appeal

After this victory, Florida settled with Trulieve rather than pursuing an appeal.

“Following a ruling by Judge Karen Gievers claiming the statutory caps on dispensaries unconstitutional, Trulieve Cannabis, Florida’s largest medical cannabis licensee, has settled their challenge with the Florida Department of Health. Trulieve’s 14 dispensaries that were established before the statewide cap was enacted are now excluded from the statutory cap.

Trulieve and the Florida Department of Health reached a mutual settlement which specifies that only dispensaries approved after the statewide cap was enacted are counted in the cap calculation for Trulieve. Presently, the law limits the number of dispensaries a medical marijuana treatment center (‘MMTC’) is allowed to open based on the number of active patients on the medical marijuana registry. These caps are in place until April 2020. Under this settlement Trulieve will be entitled to 14 dispensaries in addition to the authorized cap amount for as long as the cap remains in place.”

Under the terms of settlement, Trulieve’s first 14 dispensaries – which pre-date the cap – will not count towards Trulieve’s dispensary limit. This allows Trulieve to open up to 49 dispensaries in Florida before April 1, 2020, while other cannabis companies will be capped at 35 dispensaries.

The settlement does not apply to the cannabis companies that operated the other 17 dispensaries that were in place prior to the cap being enacted – those companies are still capped at 35 dispensaries until April 2020. 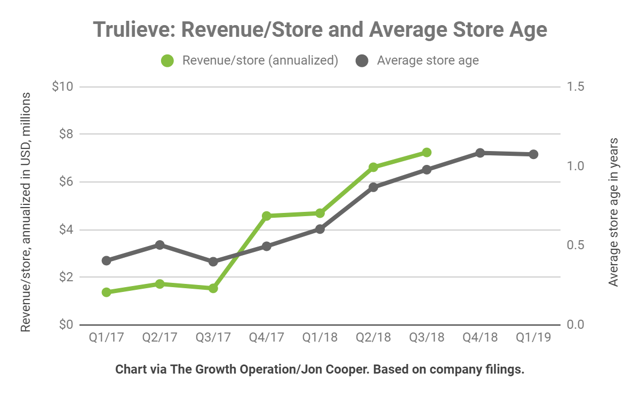 For example, over the past seven quarters, there is a 92% correlation (84% r-squared) between Trulieve’s revenue/dispensary and their average dispensary age, figures that I track for my coverage of Trulieve on The Growth Operation. To the extent that Trulieve can surpass 35 dispensaries before its peers, Trulieve will have an advantage over those peers – especially peers that have to “wait” at 35 dispensaries until April 2020.

As of Florida’s most recent Office of Medical Marijuana Use update, Trulieve has 27 dispensaries and has opened 10 dispensaries since the start of October 2018. As this pace, Trulieve would hit 47 dispensaries by April 2020, well past the 35-dispensary limit of other cannabis producers, even without accelerating their dispensary opening schedule due to a higher cap.

Meanwhile, both Surterra Wellness and Curaleaf are also nearing the dispensary cap:

Both Surterra Wellness and Curaleaf are on pace to bump into the 35-dispensary cap in about six months, in September or October 2019. In both cases, these companies will be forced to stop building dispensaries while Trulieve is able to glide through the 35-dispensary limit on its way to 49 dispensaries.

None of the other competitors in Florida, including Liberty Health (OTCQX:LHSIF) or recent-IPO Cansortium‘s (CNSX:TIUM.U) Knox Medical are on pace to pass the 35-dispensary mark by April 2020. However, recent Florida entries from multi-state operators including Acreage Holdings (OTCQX:ACRGF), MedMen (OTCQB:MMNFF), Green Thumb (OTCQX:GTBIF), and iAnthus (OTCQX:ITHUF) may also challenge this settlement, given their relatively deep pockets that could enable rapid growth, if permitted by Florida law.

Under the terms of this settlement, it feels like Trulieve has an unfair advantage over its competitors. As a Trulieve investor, I don’t mind.

We are the largest community of cannabis investors on Seeking Alpha. We recently launched in-depth comparisons of both Canadian LPs and U.S. multi-state operators for investors interested in this rapid growth sector.

Disclosure: I am/we are long CNSX:TRUL. I wrote this article myself, and it expresses my own opinions. I am not receiving compensation for it (other than from Seeking Alpha). I have no business relationship with any company whose stock is mentioned in this article.

Editor’s Note: This article covers one or more microcap stocks. Please be aware of the risks associated with these stocks.