2018 was a truly monumental year for cannabis. The marijuana industry was valued at about $10.4 billion and is expected to only grow exponentially from there. By the end of last year, two more states (Michigan and Vermont) legalized cannabis for recreational use, bringing the total to 10 states and Washington, D.C. that allow for recreational marijuana. With the addition of Missouri, Oklahoma, and Utah, a total of 33 states now legalizes medical marijuana use. The new farm bill, which passed with a huge amount of support from the House and Senate, legalized the growth of industrial hemp.

The Shift in Attitudes Towards Cannabis

Even beyond legislation, societal attitudes surrounding cannabis are changing drastically. While marijuana still isn’t legal on a federal level, the societal support for it is huge. According to a Gallup poll from last year, about 66 percent of Americans believe cannabis should be legal. An online Harris poll found that a massive 85 percent of Americans believed that marijuana should be legal for medical use, many of whom also believed medical marijuana could play a vital role in the growing opioid crisis. With all that in mind, we thought we’d conduct our own study to get up close and personal with the general public’s attitudes and knowledge surrounding cannabis and the trend toward societal acceptance.

Why Did We Conduct A Study on Cannabis Attitudes?

We wanted to look deeper into the social attitudes surrounding cannabis use and figure out if they still prevailed today, and that’s where our study comes in. The goal of the study was to expose some of the biases and misconceptions about cannabis. We also wanted to see what people actually knew about cannabis, from cannabinoids to general effects.

“We can see that attitudes have shifted because people are buying cannabis, but collectively, what do people think,” asked Brandon Nolte. “How do people feel about it? We wanted to learn how people felt about cannabis and truly see how things have changed.”

The Changing Cannabis Attitudes: A Look at Our Survey

The good news is that a lot has changed since then, and if our study is any indication, we’re heading in a good direction. We conducted this survey with help from Survata, an independent research firm from San Francisco. The responses to questions with multiple choice answers were randomized to eliminate response order bias. We had 454 total respondents from across the Survata publisher network. Respondents were men and women over the age of 18 living in the United States. 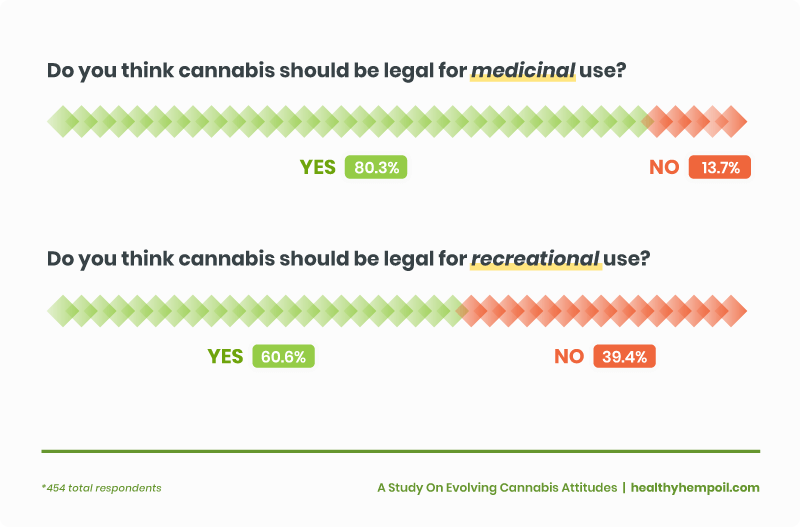 40% of people had a more positive attitude towards marijuana. 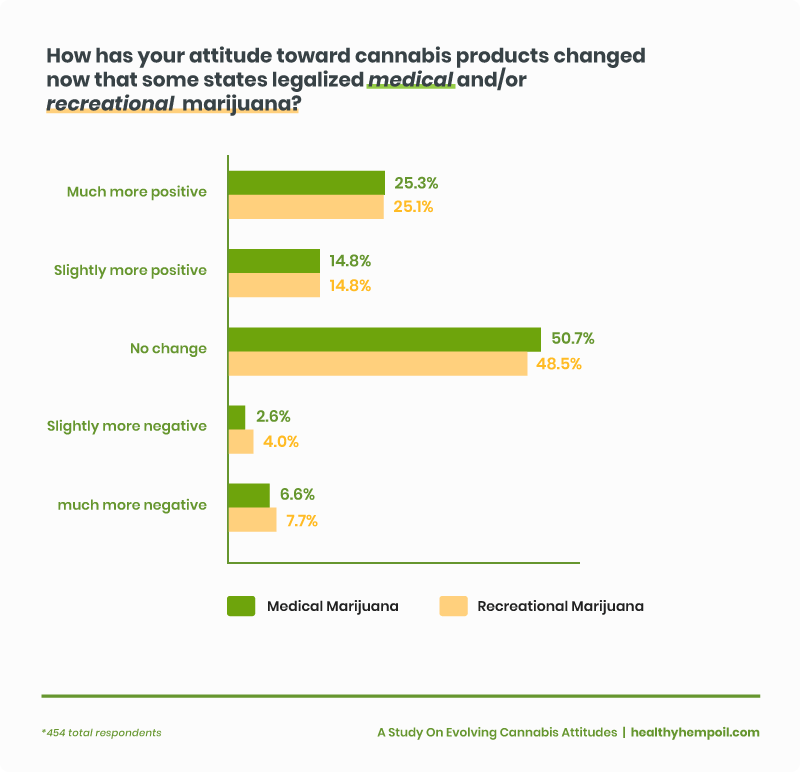 Cannabis is associated with relaxation, hunger, joy, and sleepiness.

A little over 47 percent associated cannabis usage with hunger, which has been proven in several studies. Mouse studies have found that THC activates the neurons in the hypothalamus. Instead of creating the chemical that signals physical fullness, THC causes neurons to tell the hypothalamus that you are hungry, even if you just ate, driving your natural hunger. Earlier studies also found that cannabis affects the cannabinoid receptors in your olfactory bulb. This results in food smells and tastes becoming exponentially more intense, which can also affect the amount that you eat. 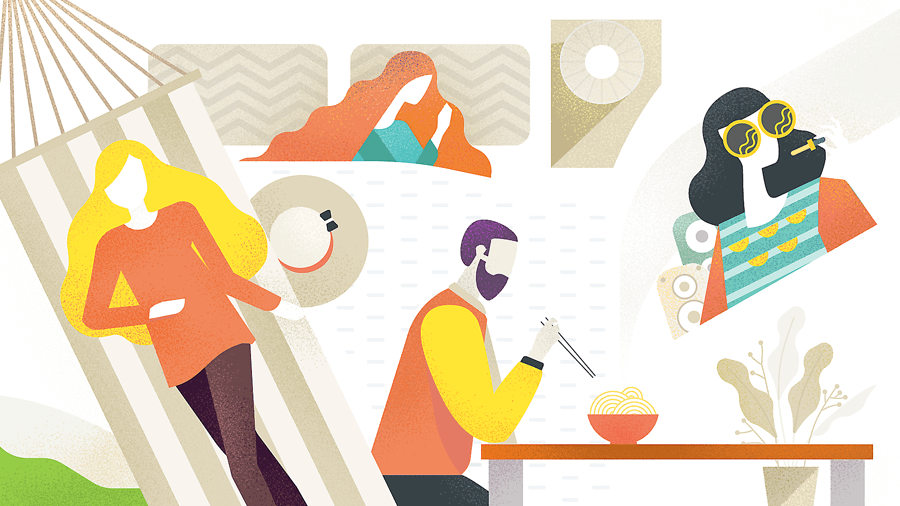 Happiness, giggles and feeling uplifted are associated with cannabis.

Cannabis is also associated with sleepiness.

About 35 percent also associated cannabis use with sleepiness, which is another widely studied claim. Some studies show that THC acts to induce sleep. CBN is also useful for sleep as it possesses a characteristic sedative effect, which may contribute to more restful sleeping.

Some studies suggest that using cannabis may also improve sleep quality by reducing REM sleep, which is the sleep phase wherein you have dreams. Theoretically, spending less time in the REM phase means more time spent in the deep sleep phase, which is considered to be the more restorative, restful phase in your sleep cycle. Although REM is still important to your sleep and overall health, these studies could suggest that cannabis usage could help to promote better sleep habits and quality.

It should be noted that the effects of cannabis can vary from person to person. While it may induce sleepiness in some, it may keep others awake or they may not be affected at all. 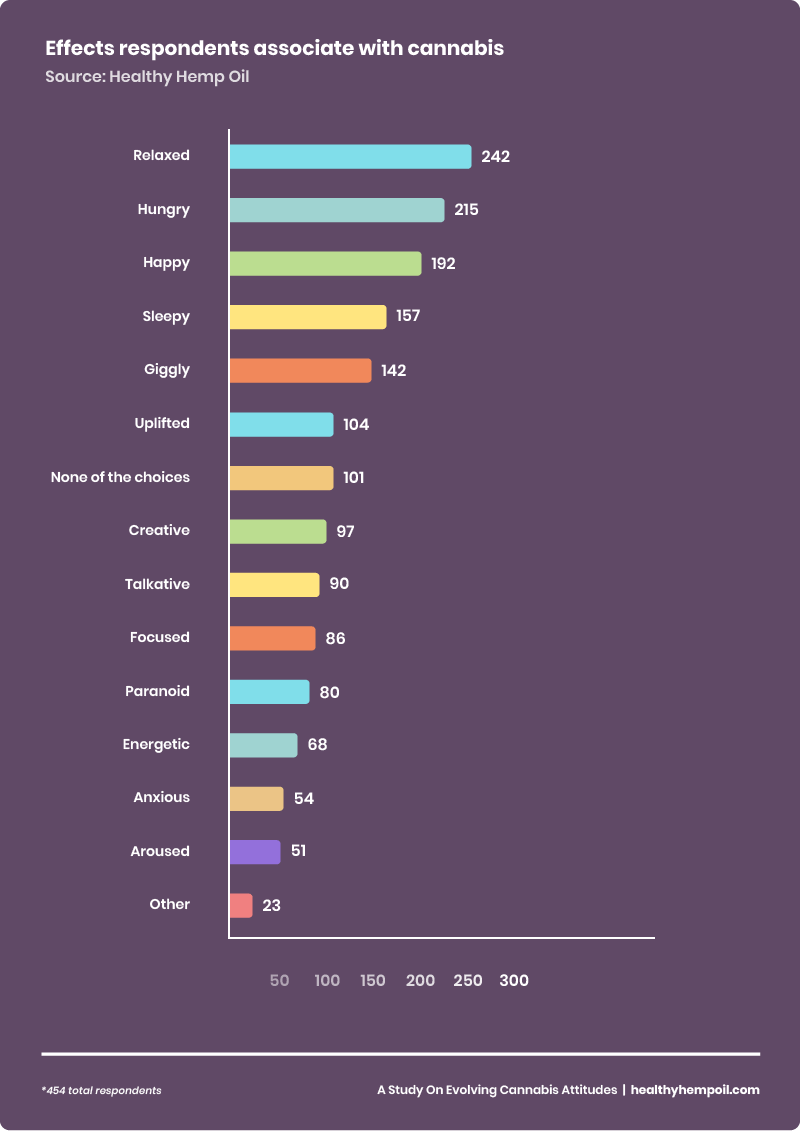 65% of respondents believe cannabis should not be a schedule 1 drug.

Under the Controlled Substances Act, the federal government essentially places all drugs into a series of classifications known as schedules based on the drug’s potential for abuse and medical value. Schedule 1 drugs are considered to have no medical value and present a high potential for abuse. They are seen as the most dangerous drugs that may come with severe physical and psychological dependence. Other drugs aside from marijuana that are classified as schedule 1 include:

Difference between schedule 1 and schedule 2 drugs

Schedule 2 drugs include cocaine and meth. While the law regards cannabis as more harmful than cocaine or meth, schedule 2 drugs are considered to have just as high of a potential for abuse as schedule 1 drugs but may present some medical value. If anything, this just shows how arbitrary the system is and how stigmas have had a very real impact on government legislation and classification.

65.2 percent of respondents believed that cannabis should not be categorized as a schedule 1 drug. That means that a vast majority of respondents were against the classification and the drawbacks it comes with. 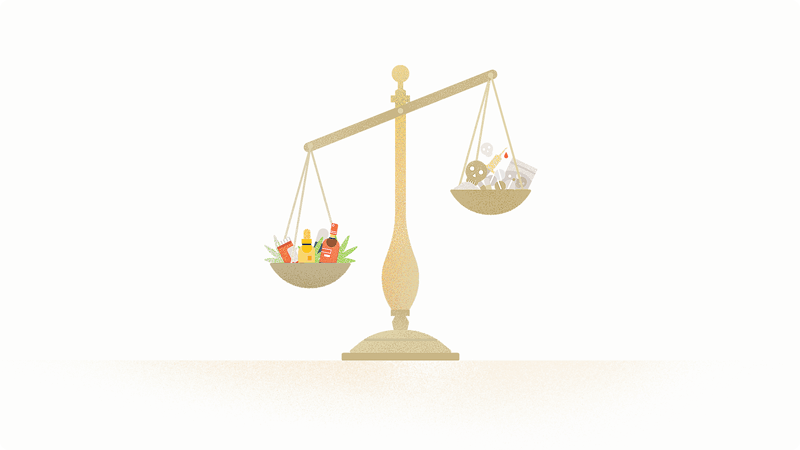 Disadvantages of cannabis having a schedule 1 classification

Cannabis’ classification as a schedule 1 drug places stronger restrictions on it, which ultimately means harsher criminal penalties for usage, cultivation, or ownership. Schedule 1 classifications can also potentially interfere with state laws and taxes, bank loans for businesses, and even de-licensing for doctors who prescribe medical marijuana. Removing marijuana as a schedule 1 drug would be a huge step in supporting new businesses, state decriminalization, and preventing punishments for those who actually need medical marijuana for therapy.

Over 86% of people support medical marijuana. 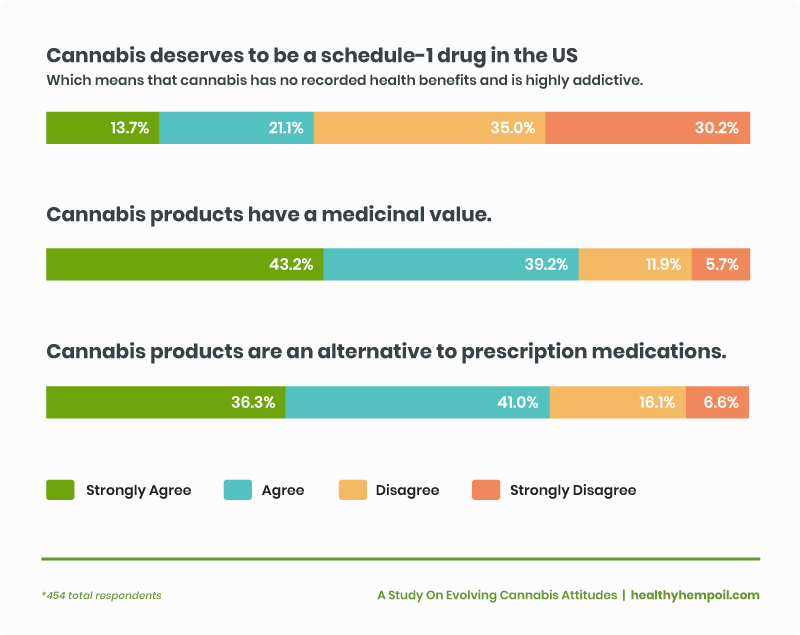 Most were unswayed by a political candidate’s stance on cannabis. 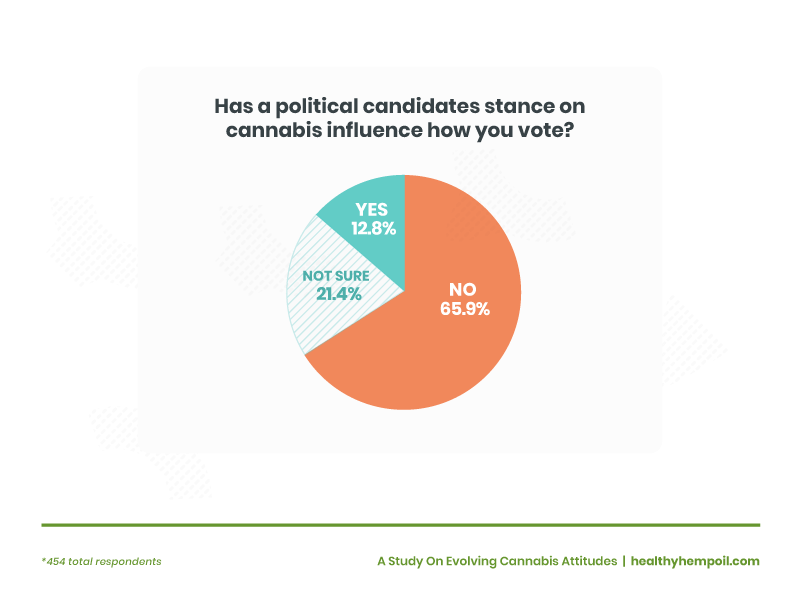 Illegal possession of cannabis should come with light punishments, if any at all. 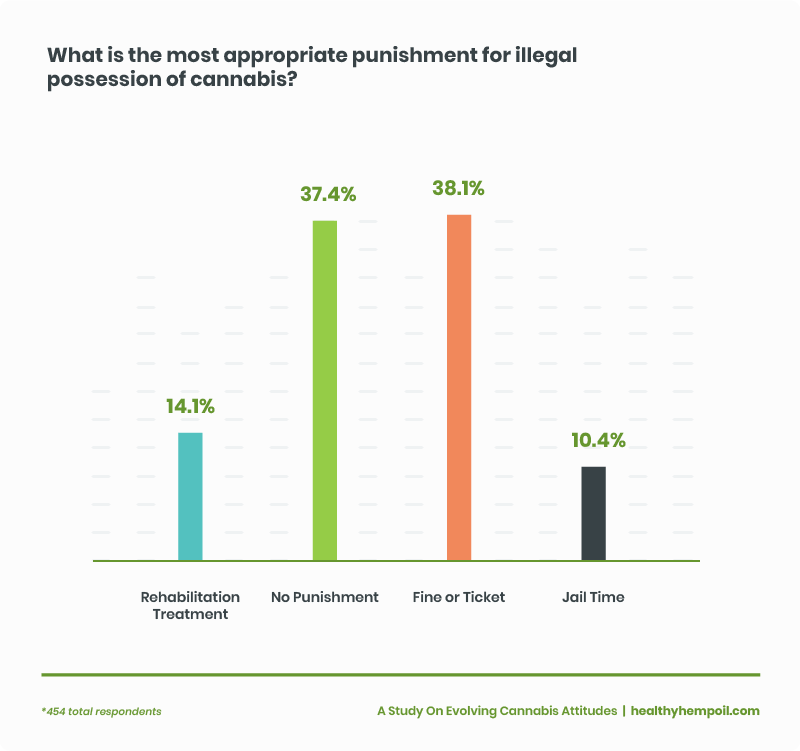 Not all respondents were familiar with the compounds in cannabis. 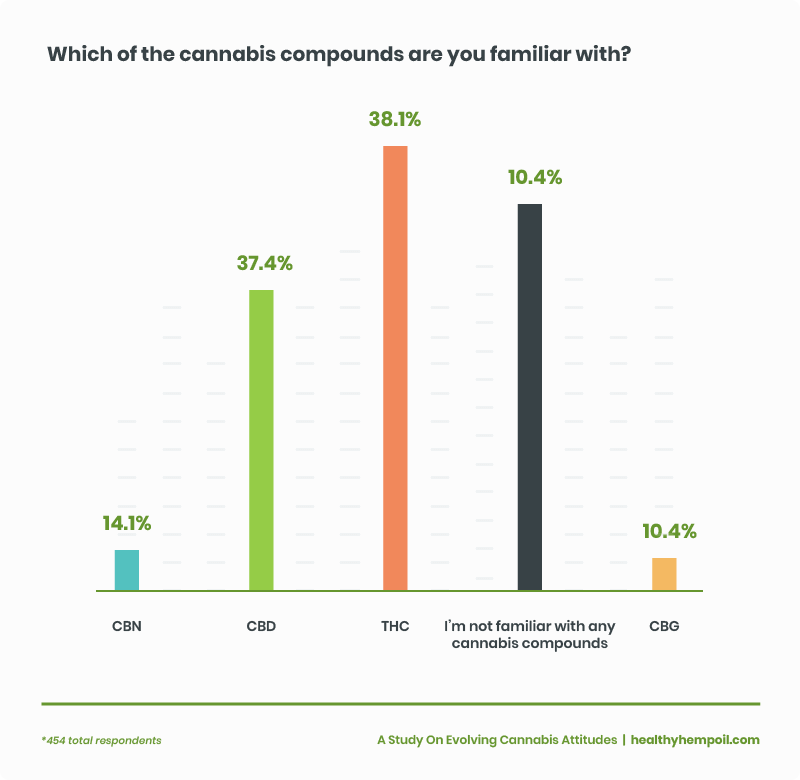 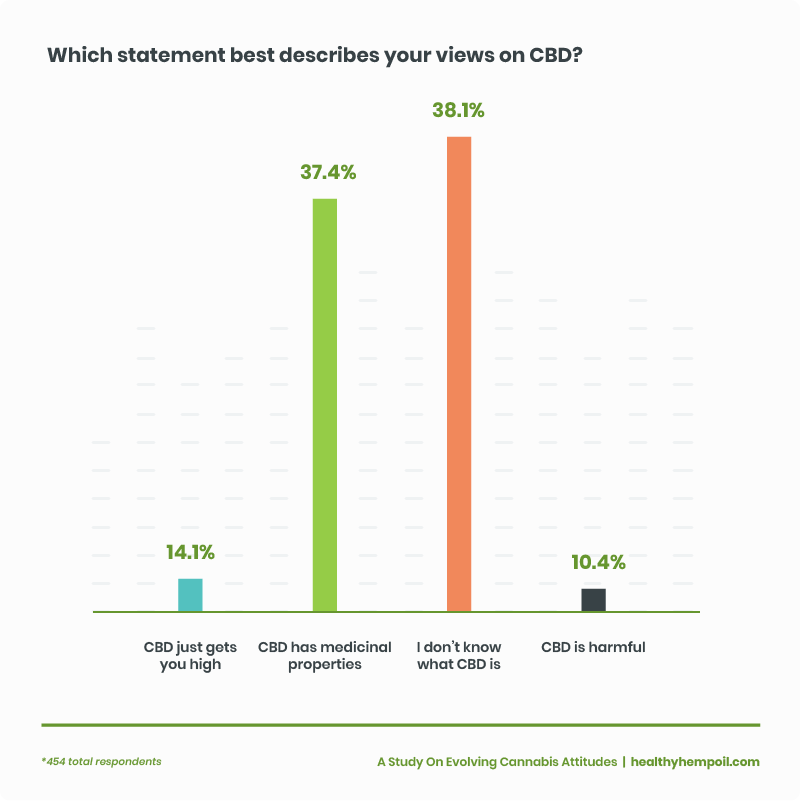 If you read our blog regularly, you probably know that CBD, or cannabidiol, is one of the main cannabinoid compounds in cannabis. CBD does not induce any psychoactive effects. Instead, studies suggest that CBD presents more physical therapeutic benefits. CBD may help to reduce stress, relieve general pain and inflammation, improve sleep quality, and boost mental and physical energy.

As our survey and other surveys show, the majority of the nation’s population supports legalization of both medical and recreational cannabis use. Much of that comes down to retiring the old attitudes surrounding cannabis, and with growing research and education, more people will rethink these attitudes and understand that cannabis may actually present some benefits for everyone. We were most surprised by how many respondents didn’t know what CBD was, but we hope that we can provide you with plenty of information to help you learn about CBD and cannabis in general.

Information as of March 2019. | Interactive Map via Governing

What do you think?

What surprised you? What responses do you agree or disagree with? Let us know in the comments.