The truth about CBD is that it’s fake. There, I said it! It’s placebo. The entire cannabis industry wants you to believe that it’s real. More than that, it’s claimed to be even better than medical marijuana because it has the beneficial properties “without the high.” Countless of dollars are spent on this cannabis extract. Studies have revealed benefits using cannabidiol (a.k.a. CBD) to treat seizures. Proponents (and sellers) claim that it has anti-cancer effects and treats pain. After treating thousands of patients with medical marijuana products since 2015, I’ve witnessed many chronic pain patients choose high-CBD strains, which has caused me to believe in CBD longer than I should have.

CBD Studies on Children with Seizures

Last year, I wrote about a study published in the New England Journal of Medicine, which convinced me that CBD works. It was this study that lead me to start a CBD company so that I could provide my patients CBD product that was cleaner and more accurately dosed than the CBD products for sale online. FDA reports of these products showed that they were unreliable and potentially risky for my patients, so I felt obliged to provide them an alternative I could trust.

My own placebo product is on hold until further notice.

Despite the availability and financial incentive to sell CBD to patients, I just couldn’t bring myself to be proactive about it. I’m an honest guy, and all I have is my word, so I was not about to make up false claims about the product. From years of experience treating epilepsy patients with cannabis products, I knew that it was THC – tetrahydrocannabinol – that had anti-seizure properties. To confound this further, a skeptical Chinese correspondence letter about the (previously linked) Dravet syndrome trial by Devinsky et al. questioned the results by suggesting that the decrease in seizures was the effect of CBD on the metabolism of a drug called clobazam, which 65% of the trial’s participants were taking.

If what they say is true, then epileptic children responding to CBD are likely on this drug or other medications affected metabolically by concomitant administration of CBD. Either that, or they are also being given THC, which has the real anti-seizure properties.

Why My Patients Choose High-CBD Strains

It’s been known for some time that consuming CBD lowers the adverse effects associated with THC use. This is attributed to the concept colloquially known as “the Entourage effect.” It’s a fairytale idea that the primary active ingredient in marijuana is optimized by the addition of other cannabinoids and organic compounds called terpenes. A variant of this theory is that a portion of the therapeutic properties of marijuana are from the other compounds, including but not limited to CBD. Let’s explore these two theories.

THC is Improved by the Entourage

One thing I’ll admit is that CBD affects THC metabolism. This is what causes the apparent decrease in side effects. Certain metabolites go up or down in concentration during the onset and duration of the high, affecting how it feels. I’m somewhat skeptical of this as of late and here’s why.

I have yet to read a study that proves anyone can distinguish between Cannabis indica and Cannabis sativa strains. With the advent of marijuana concentrates like CO2 extract vape cartridges and shatter, the distinction is even more blurry. What I’ve found is that a person’s therapeutic experience is affected by their prior expectations. By telling someone they are consuming a strong indica, the patient is primed to experience the characteristic “stoned, couch-lock” associated with indicas. On the other hand, patients sold sativas will experience lighter “head-highs” not because they are using marijuana of the Cannabis sativa variety, but because they are told thats what will happen. It’s a self-fulfilling prophecy.

My point is that the effects of medical marijuana do vary depending on the user’s expectations, environment and mood. This creates the superficial appearance of a spectrum of health benefits and effects in marijuana, but it’s only a mirage. The reality is that THC is the one and only king of the cannabinoids because it has a plastic, adaptable pharmacological effect spanning a variety of organ systems. All of the therapeutic effects seen in medical marijuana over the years come from THC in one way or another.

Why does CBD lower the side effects of THC? Simple. It’s because products high in CBD typically have less THC in them and users can medicate more without overshooting the therapeutic window. When users with chronic back pain medicate, they want to do it every morning without affecting the rest of their day. Low-THC, high-CBD strains allow them to self-medicate with a shallower angle of take-off, so to speak. They can lift-off enough to reach 90% of the pain-effects without getting so high their head’s in the clouds (or outer space…). Any side-effects typically experienced by users are spread out over the course of the treatment and have a less impactful onset- another explanation for the improvements often attributed to CBD.

In short, CBD can be beneficial but in a less glorious way: by being the “filler” in low-THC medical marijuana products. Rather than overtly advertise as low-THC (same-price) rip-offs, horticulturalists artificially select plants with CBD in place of the THC and distributors (“dispensaries”) advertise them as high-CBD products instead of the more applicable “low-THC” products that they are. Once marijuana is legal the way it should be and anyone grows their own strain of choice, these less-potent cultivars will be more appreciated without the need for CBD. The stuffer being added to low-THC strains isn’t necessary. We can forget about CBD.

Other Therapeutic Cannabinoids and Terpenes

The other “entourage effect” model is that THC isn’t the only compound in medical marijuana that has therapeutic properties. I disagree with this until there is evidence to suggest otherwise. Until there is strong evidence to suggest otherwise, all the effects of medical marijuana can be explained by THC. When I started to use cannabinoids on patients in the ICU, it was using marinol on depressed and demented end-of-life elders. It was the positive results of using this pure-THC synthetic pharmaceutical that later inspired me to continue the tract I’m on. Nothing else is needed to explain the vast benefits I’ve witnessed in my patients from their use of THC.

The Structure of CBD

While I do admit that there may be a cannabinoid that has therapeutic efficacy and may be contributing to the benefits of medical marijuana, I definitely don’t believe it’s CBD. One of the reasons for this is its molecular structure. The difference between CBD and other cannabinoids is drastic. Let’s take a look: 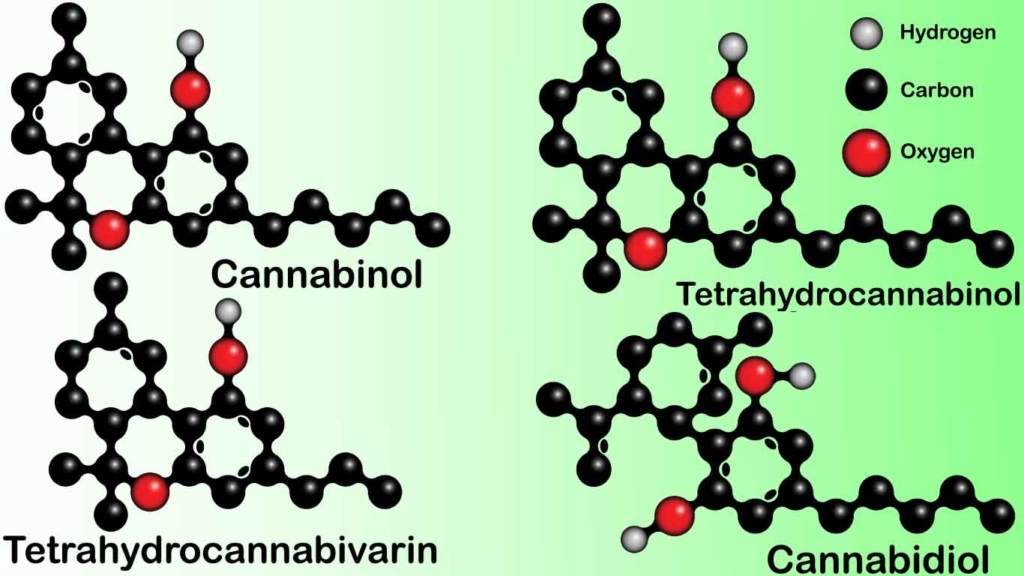 The broken ring in the middle of the CBD molecule is a drastic difference in structure (and therefore function).

As you can see, most cannabinoids have a structure consisting of multiple rings. The center ring in THC and cannabinol (CBN) is broken in CBD. Even the drawing of CBD by the industry is portrayed in a way to suggest that it is a similar molecule. When drawn in another way, it is more obvious how different CBD is compared to the rest of the cannabinoids in medical marijuana: 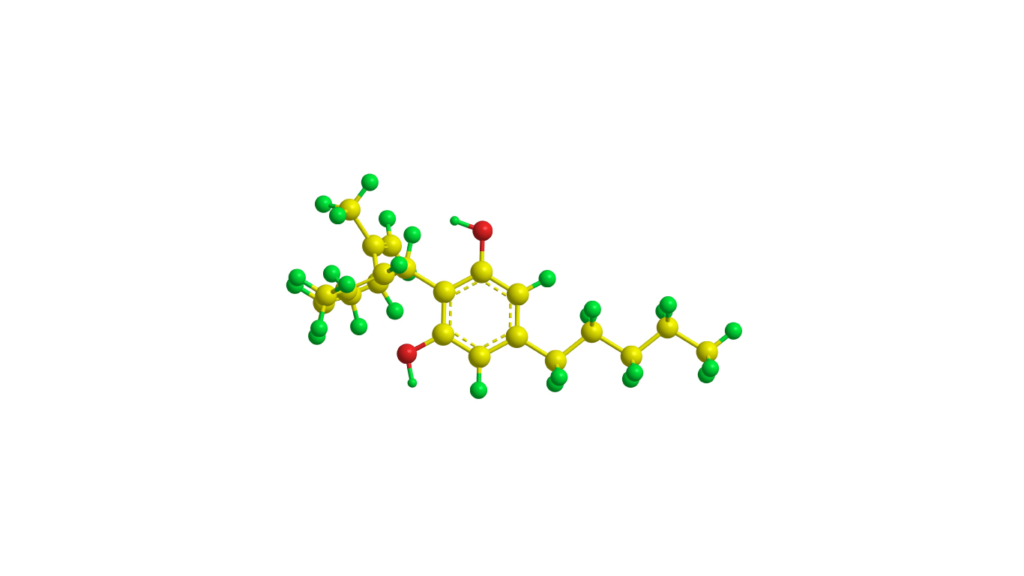 With the ring broken, half the CBD molecule can spin on its axis.

The function of a neurotransmitter or hormone in the body is directly linked to its ability to activate a receptor, like a lock and key. If the shape of the key is changed, the lock can’t open.  If the endocannabinoid system has two receptors, CB1 and CB2, and they both behave like a lock that is opened using a key in the shape of THC, how is a CBD key gonna work!? (Answer: It doesn’t.)

Wait a sec, doc, how can everyone in the world be wrong and you’re right?! Well, boys and girls, I’m a skeptic through-and-through. Remember, I went into this because I threw away traditional healthcare practices that I thought weren’t working. Cannabis was central to the practice because I knew that it worked wonders (but the research was blocked by the DEA and the doctors were clueless). However, I haven’t adopted anything more than a natural form of THC. Using CBD for “improving THC’s effects” was a fleeting idea instilled in me by a global climate increasingly idolizing the effects of CBD and downplaying or downright condemning wonderful THC and the high that comes with it. It’s not easy gathering my wits and going public about this.

I’m saying this and sticking my neck out as one individual opposing a multi-million(billion?) dollar industry.¹

Mass placebo effect brainwashing isn’t as uncommon as you think. Actually, it’s everywhere: acupuncture, chiropractic, cancer trials, dieting, even “western medicine.” We are led to believe that all of these healthcare modalities are helpful for us when in actuality, when all the evidence is examined the truth is that we are conned. I didn’t used to believe that this was true of allopathic medicine, but in time I came to the realization that even that was a farce. We were providing the best healthcare at the moment to bankrupt patients and ruin their long-term quality of life, which eventually destroys their health anyway.

Don’t let the CBD industry fool you into buying an inactive product. This could be the start of a never-ending global placebo effect driven by corporate profits. Just remember this: It doesn’t get you high because it doesn’t do anything at all. Save your money for therapeutically-active THC!

So that you save your money by having more realistic expectations of CBD. When someone claims it can cure your cancer, they won’t distract you from more fruitful options. When the dispensary tells you they’re out of THC capsules but CBD ones are available, you’ll save your cash for movie tickets for the family.

Money in your pocket is your healthcare too.

1. Nevertheless, Cannapillar CBD supplements are still the best CBD product on the market because their purpose is non-therapeutic: (a) Accurate doses, (b) purity on lab testing, and (c) lowest price per gram.

My Previous Opinion on the Subject: THC vs CBD (Video) – November, 2016